OCTOBER 15, 2015, PHOENIX, AZ — MEI Rigging & Crating performed a turnkey factory relocation for a solar panel manufacturing equipment company, destined for Barbados. Deltro Electrical LTE, a solar contractor, needed help with a huge project to move their entire solar panel production factory from their Arizona location to Barbados to create solar panels for a solar energy farm. All this needed to be accomplished in 6 weeks – a project that would normally take 6 months to complete.

The solar panel factory relocation is part of an objective to create a solar energy farm as part of a national energy policy for Barbados, helping create national energy security for this sovereign island country in the East Caribbean.

MEI Rigging & Crating’s Arizona team executed the rigging teardown and disassembly of the solar line and other equipment, crated the production line, and blocked and braced it on an ocean container headed for Barbados. The Deltro Electric job used a total of 30 high cube containers (tall shipping containers) and 4 flatbed trucks to transport the disassembled solar module manufacturing line, along with everything else in the building. There were a total of 55 skids and 15 crates used to package up all the equipment from the line. The largest size crate was for the Framing Station with dimensions of 268 x 147 x 79. The heaviest crate was the Laminator which weighed in at 32,000 lbs (crate & tool) and measured 221 x 137 x 118.

“I feel a lot of pride in my work, especially with this project”, says Jake Louk, Project Manager for the Phoenix division of MEI Rigging & Crating. “Tackling such a large move is a challenge, and being able to deliver this job on such short schedule, reducing time to shipment by 80% really shows the best of the project management and execution abilities of our team”

Offers construction design/build and maintenance services; and rooftop solar engineering, procurement, and construction contracting services. Its projects include industrial, commercial, public, and renewable projects. The company was founded in 1989 and is headquartered in Mississauga, Canada. 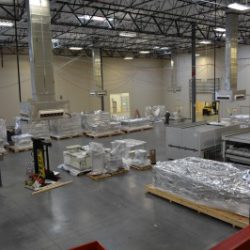