JUNE 10, 2015, LEHI, UT — “Clever Girl,” says the Game Warden in the first Jurassic Park movie, upon realizing that Velociraptors (really Utahraptors) do indeed hunt in packs. These clever Utahraptors are now on display in the Museum of Ancient Life in Lehi, Utah, thanks to a well-executed delivery of these rare fossils by MEI Rigging & Crating LLC.

Getting them there was not an easy feat. It took 4 hours of careful maneuvering with a crew of 4, and a 45-ton crane to pack and crate up the fossils for transport and then move them into the lab at the Museum of Ancient Life. Loading in the 16-foot skeleton through a standard loading door took dozens of adjustments, with just inches to spare, and the crew was lucky it wasn’t larger.

These dinosaurs lived in the early cretaceous period and could grow to be 9 feet tall and 19 feet long. The museum of Ancient Life is excited to have them on display. “I want people to see what real Utahraptors should be like, not the ‘Jurassic Park’ version,” said Dr. James Kirkland, Utah Geological Survey paleontologist. Dr. Kirkland had had the opportunity to name 20 different dinosaurs, but this group of Utahraptor fossils is the most important single block of fossils that he has ever been a part of.

Randy Haapala, General Foreman with MEI Rigging & Crating, who coordinated the packing and moving was equally enthusiastic. “This was an exciting project for MEI Rigging & Crating, as this was a one-of-a-kind move where we were moving something priceless and they had spent ten years working to get the dinosaur off the mountain.”

ABOUT THE MUSEUM OF ANCIENT LIFE

Located at Thanksgiving Point. The Museum of Ancient Life is one of the world’s largest dinosaur museums. Go back in time for a hands-on trip through an amazingly realistic prehistoric world. 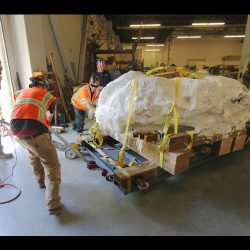 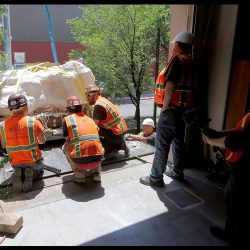